Things to Say Instead of “I’m Broke” – If you’re sick of constantly being broke and don’t know what else to say to people when they ask why you keep saying “no,” check out some other fresh ideas for reasons why you aren’t spending. 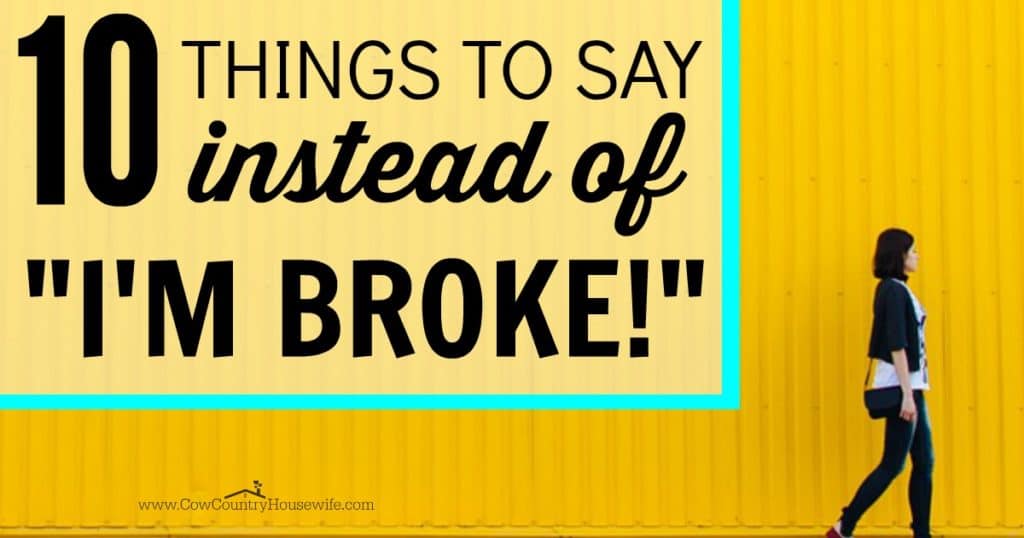 No one wants to have to tell their friends that they can’t have fun because they’re broke. Maybe it’s not that you’re “broke,” but that you don’t have it in your budget, or that you’re pinching every penny to pay off the credit card bill.

Whatever the reason is, you have no money to spend. And people don’t get that. For many people, they won’t ever get that.

Over the years, I’ve found things to say instead of “I’m broke” that really seem to resonate with people. For some reason, people are much more receptive to anything other than you just saying “I’m broke.”

If you’re just sick of having no money, here are my 5 favorite side hustles that pay for my all of my “fun” money and even more. The best part? You can do all of them from home!

Here are some other ways that you can save money:

Here are things to say instead of “I’m broke” when someone else asks you about your lifestyle choices.

1. “It’s better for the environment.”

This has always shocked me. People are more receptive and understanding to “it’s better for the environment” than they are to “I’m on a budget.”

“Why do you only shop thrift?” Because it lessens my carbon footprint!

“Why do you buy used cars?” One less car needs to be made!

“Why don’t you get takeout?” Because the containers they use are so wasteful and harmful to the environment!

See? Easily switching gears away from the financial issue to the environmental issue takes the pressure off of your wallet. There are many ways that being a hippie can actually save money.

Instead of just saying “no,” offer an alternative.

“Wanna go get dinner at this new hipster joint where the glasses of glacier water are poured by emperor penguins and cost $60 per glass?” How about we grab lunch at Panera instead.

“We should go shopping at Anthropologie today!” How about we just window shop and walk around at the mall?

“Why did you make Christmas gifts this year”? Because I’m a Pinterest Junkie and homemade is always more personal than buying gifts.

“How come you bought your dresser at Goodwill?” Upcycling is the best! A fresh coat of paint, and it’ll look like a piece from Pottery Barn.

“Why did you make your own Christmas card instead of having is professionally made?” Because I love graphic design and individuality.

4. “I actually just made dinner. Want to come over instead?”

“Wanna go get dinner?” I just got dinner out of the oven… hey, why don’t you come over?

Nothing diffuses a dinner invitation like another, sooner dinner invitation. If you can’t make it out, invite them over. Chances are good that they’ll gladly accept your dinner offer! You can still have a great time with friends without even needing to leave the house.

“Wanna go out tonight?” Ya know, my son has a runny nose… I don’t want you to get it too!

This might sound like an excuse. And while it kinda is, as a parent, it’s also always kinda the reality. Kids get colds and being that person who always spreads germs is really a bummer. Don’t lie (unless you’re feeling backed into a corner about it), but always err on the side of caution with colds.

It also makes a really air-tight excuse to get out of an invitation. No one wants to get sick. 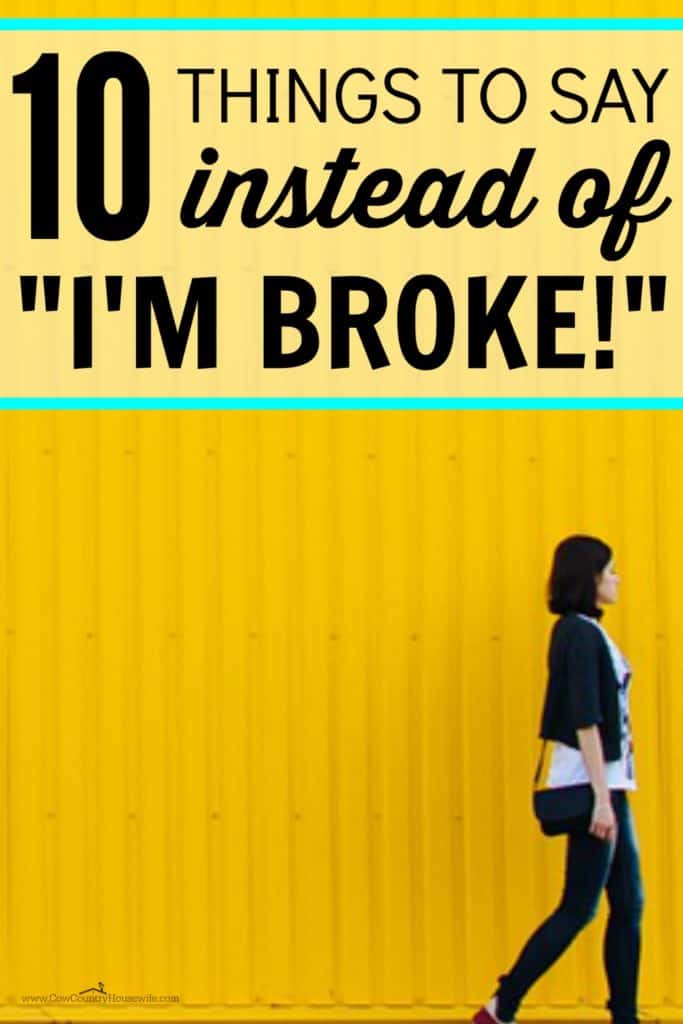 “Wanna go out tonight?” Ya know, I’m starting to come down with something… I don’t want you to get it too!

Same principle: no one wants to get sick. Even if it’s just a headache, allergies, or a slight runny nose, it’s a great way to get out of an awkward situation.

“This new coat would look so great on you!” No thanks, I’ve already got one.

“This rustic centerpiece for $325 would look so cute in your house!” I saw this on Pinterest and I’m going to give it a try!

While this is like the DIY excuse, this one applies to almost everything. Bam! Situation diffused, and she might even be interested in trying it, too!

“Wanna go shoe shopping with me?” I can’t today, I’ve got other plans already.

This might sound like a cop-out, and it might be! But sometimes, your prior commitments could be as simple as spending extra time with your husband or going to the park with the kids.

10. “I’m working really hard to pay off debt and build a savings. I don’t have the money to go out right now.”

When all else fails, tell the truth!

You never know, maybe your friend will now be your biggest cheerleader! You’re in no way, shape, or form “broke.” You’re working toward a goal that really requires a lot of discipline and responsibility. Getting off-track can really set you back.

You need as many allies in your journey to financial freedom. While there are plenty of things to say instead of “I’m broke,” sometimes honesty is the best policy. This way, you can make sure that your friends know that you still care for them but you need to find other ways to get together with them that don’t involve spending money.

What’s the best things to say instead of “I’m broke” for you? 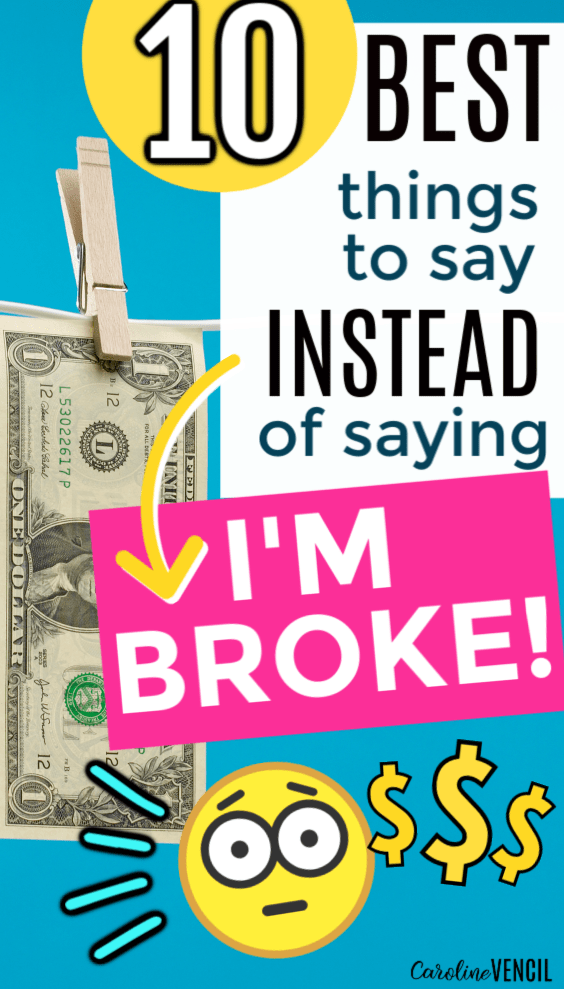 Join the FREE 10 Day Side Hustles That Work Challenge!

Here's my challenge to you:

Can you pay for your grocery bill with your side hustle?

Bring in extra income without having to spend a penny. I want to share with you the side hustles that I love that help my family every month.

Success! Now check your email to confirm your subscription.