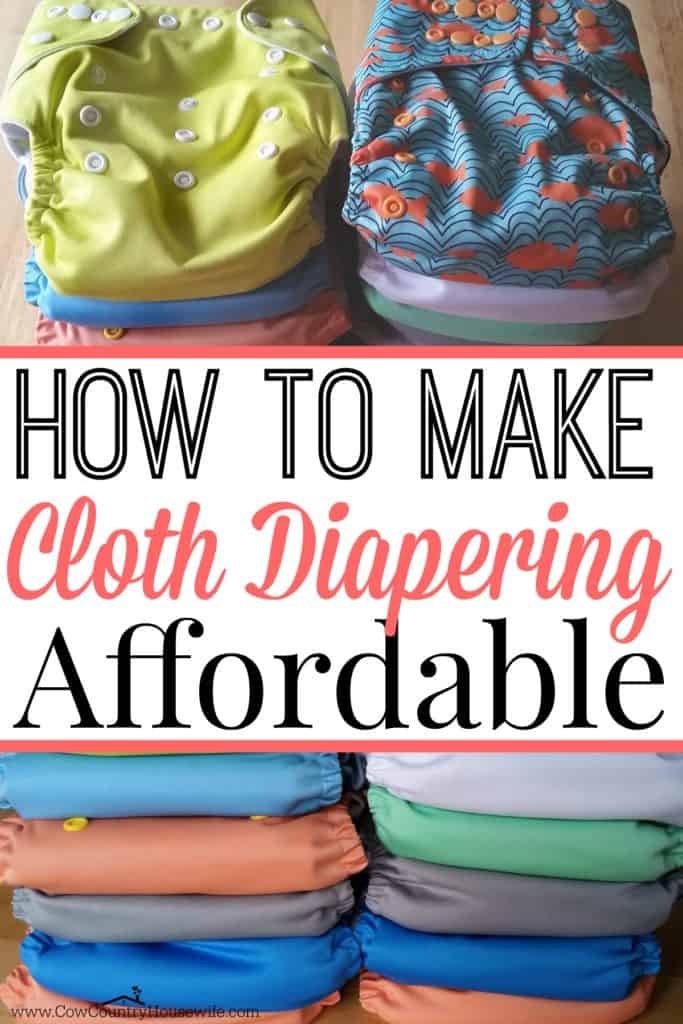 How to Make Cloth Diapering Affordable

When I had my first child, I was blissfully unaware about jut how much I would need for him. This was especially true when it came to diapers!

As a first time mom, I walked into the store and figured that the giant box of 180 diapers would have to last me a long time. At least 3 months… right?

Between not putting diapers on the right way, assuming that a diaper could only contain one pee and needed to be changed immediately, and a baby who really loved to poop (which is apparently totally normal)… I blew through that giant pack of diapers in less than a month!

I figured that $40 pack of diapers was going to last me at least 2 months! At the time, we were so, so, SO poor, so $40 was a lot of money. It was then that I first wanted to look into cloth diapering.

It was so out of my price range, so I gave up and resigned myself to the fact that we’d have to do disposable diapers and just suck it up. Maybe next time…

Next time rolled around, and we were still living off of $17,000 for our now-family of four. Again, we had to use disposables. Until the baby was about 10 months old, when the skies opened up and a heavenly ray of light shone into my world and showed me the truth:

You don’t have to take out a second mortgage to afford cloth diapers!

Here’s how I did it:

Zulily almost always has some adorable cloth diapers for $9 or less. You mean, I don’t have to pay almost $20 per diaper?! Nope!

I bought a few “cute” diapers from Zulily so that if I wanted to let my babies walk abound in just a diaper, it looked like they were wearing a diaper cover or at least something other than a plain old diaper.

I’ve bought a few of these diapers from Zulily and I’ve loved them! But the price tag is still a little steep (even if it is half the price of the high-end cloth diapers).

You can get anything off of Amazon, but I love them especially for their choices of inexpensive diapers!

I figured that I was paying around $5 for each of them and that if I broke them (because there’s a special way that you need to wash cloth diapers) or if they didn’t work properly, then I wouldn’t be too upset.

Amazingly, not only did I not break them, but I also love them! I’ve had the same set for almost 2 years of constant use and they’re still just as strong as ever.

I then bought all of my other cloth diapering supplies off of Amazon and continued to save a ton of money!

You don’t need to spend $400 or more on 20 diapers in order to cloth diaper your children!

Brings my up-front cost for cloth diapering to $276 for 38 diapers!

I love my cloth diapers and I’m never going back to disposables!

Have you found a less expensive way to get cloth diapers?