How to Get Over Limiting Beliefs with Money –

“Everybody who does blank is blank.”

“Because I am blank. Therefore in life, I can only blank.”

So I’ll give you guys an example. Okay, so I had my son when I was 19. I got pregnant when I was 18, as a freshman in college. And the story that I told myself for a long, long time was “teen moms cannot have a good life. Because I am a teen mom, because I was a teen mom, I deserved to struggle with money. I did this to myself. This is just how it is for people who had a kid when they were 19.”

That’s not how it works. So those were limiting beliefs that I’ve had, I have many, many other things do we all do.

These are things that we pick up over time going through our lives. 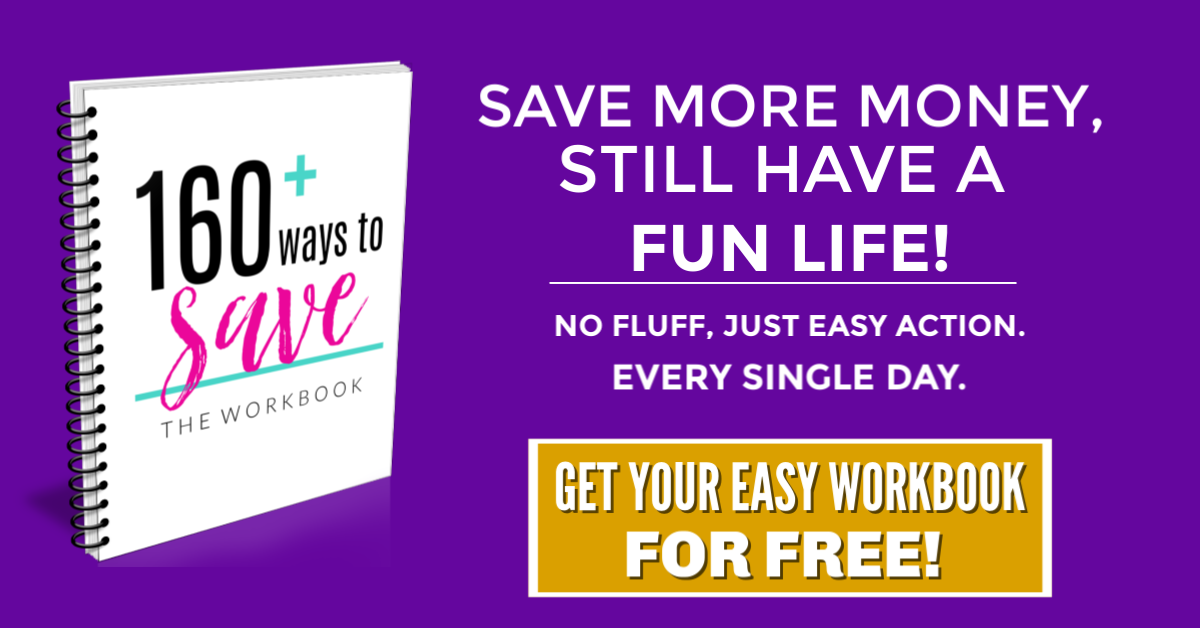 We all have many, many things that keep us stuck, that we tell ourselves as kind of a security blanket as kind of an excuse, or an out that we can give ourselves of why our life is the way that it is.

“I don’t make a whole lot of money because I was a teen mom.” There it is. That’s my excuse. That was the excuse that I carried for a long, long time. But the truth is that that doesn’t have to be the way that it goes.

We go through our life. And we pick up these stories from what we saw, usually in our childhood (it all goes back to childhood) we pick up these little stories about things that have happened. And it means something to us, and it sticks to us.

And then we go through life carrying around these limiting beliefs. We go through our entire day. And these beliefs color, what we see in the world, it colors, our expectations, our perceptions of what we see.

You get home and you’re like How did this happen? How am I covered in all of this stuff? And what do you do? You grab a lint roller and you brush it all off.

That’s what we are going to do. Your negative limiting beliefs are like the lint that you pick up throughout the day. You don’t know how it got there. You don’t know where it started. You just know that it’s there and you need to get rid of it.

You need to use a lint roller of truth to get rid of the lint of limiting beliefs. There’s my analogy for the day guys.

The limiting beliefs that we have don’t have to define us, they don’t have to dictate our future, they do not tell us what kind of life you’re going to have. They are just things that we pick up over time.

The problem, of course, comes in when you don’t pick up the lint roller of truth to wipe off the lint of limiting beliefs. That’s when it becomes a problem.

So in order to avoid doing that, we have to get rid of these limiting beliefs. We need to shed them and say “they no longer define me. They protected my brain from the past, they were things that I saw. But it does not have to be that way in the future.”

One of the biggest ones that I hear about budgeting is that “I will start a budget when I have money.”

Those are all limiting beliefs, when in reality, the truth of these things, the real money story behind these things is that people who have money have a budget, and that’s why they have money.

In your budget, you are allowed to put aside money for the things that you want.

You do not have to be stuck in a paycheck to paycheck cycle just because your parents were.

None of that stuff has to define you going forward.

So what I want you to do today, sit down, and write some of these out.

Here’s what you’re gonna do, you’re gonna break out a piece of paper, fold it in half. On one side, you’re going to write up every single thing that you can think of that you’ve picked up over time that is a limiting belief. Write it all down all of it. All of that negative stuff that you’re thinking about money and what it means to be on a budget. You’re going to write up all of your negative limiting beliefs around money.” I can’t have money because people like me don’t have money.” “Budgeting means this, this, and this.” “I can’t be fun and have a budget.” “I will always live paycheck to paycheck.”

What are the things that you constantly say about money? Maybe you can’t – or don’t – say them out loud, because obviously, they sound crazy, right?

But what are the things that are going on inside of your head that is saying why you “will always be stuck.” Why you will “always suck with money,” why you will “always be the kind of person that you are,” how you are “doomed to be… something,” write it all down on a piece of paper. And on the other side of that paper, write a new story.

But just write something out.

“I’m doomed to suck with money.” Is that true? Ask yourself, “is that true? Is that the truth of the world of the universe?”

“I’m going to suck with money forever.” Is that the truth? No. Is it written again, in the sky, in the Bible, in the threads of the universe, tattooed on your arm? No. Then does that mean that you can change it? Yes, it does. So write that down.

Can’t think of anything positive? How about…

“People who have a budget are allowed to have fun.”

“I am allowed to save money.”

“I am going to have that dream vacation and still pay off my debt.”

“I am going to have my dream house.”

Change your story and choose a better one that makes you excited and motivated. I keep my new money stories wherever I can read them. Usually, they’re on my desk. And whenever I’m feeling down about my money, I go back and I read them.

“I will read I am going to be a millionaire. I’m going to break generational curses on my parents, I am going to be the first woman millionaire and my family. money gets easier and easier to work with the more that I practice. Just because I was a teen mom that doesn’t define my future.”

I keep this where I can see it every single day. And whenever I feel down about myself, I look at that piece of paper. And I remind myself of the actual truth.

The stories that we tell ourselves inside of limiting beliefs are not the actual truth. They don’t have to define you. They may have been true about what happened in the past, but it doesn’t have to mean that this is how life will be like in the future.

Now you have homework. Grab a copy of the Change Your Money Story workbook and write down all of your limiting beliefs. Get them out onto paper, look at them, stare them in the face. Even if you feel crazy writing them down, write it down.

Change the story. Write it down and change the story of those limiting beliefs holding you back. Make it into something that’s even better than what you could have ever imagined it for yourself. 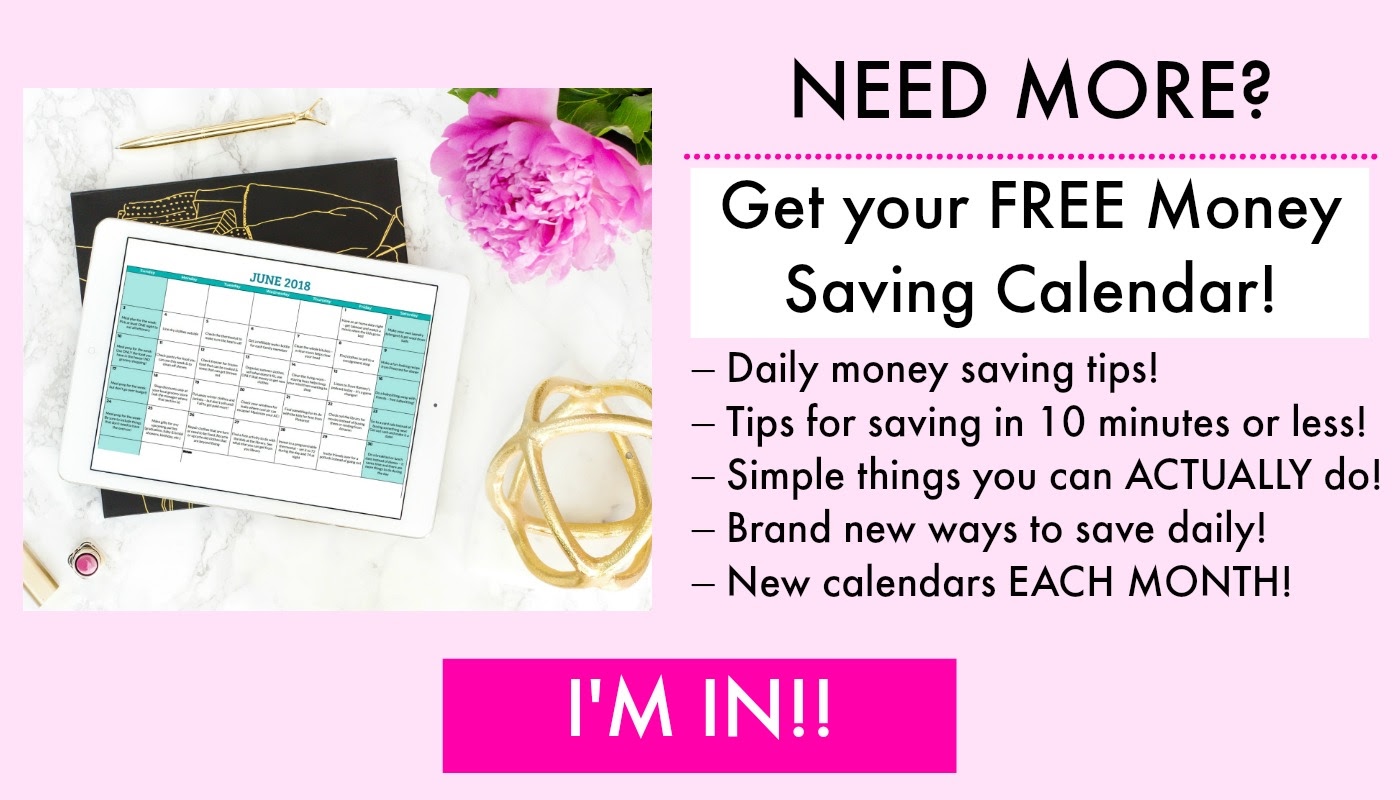 Write everything. Write down your negative limiting beliefs and write down a better story. Look at the better story and choose to believe that that is how it’s going to be for you going forward with your money.

Let go of all the negative stuff that’s keeping you stuck and trapped and you will be amazed at how much lighter and easier you feel. 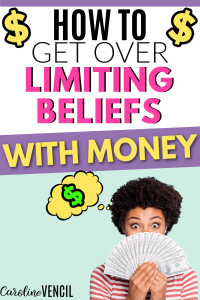 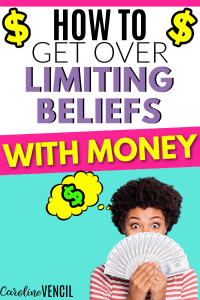