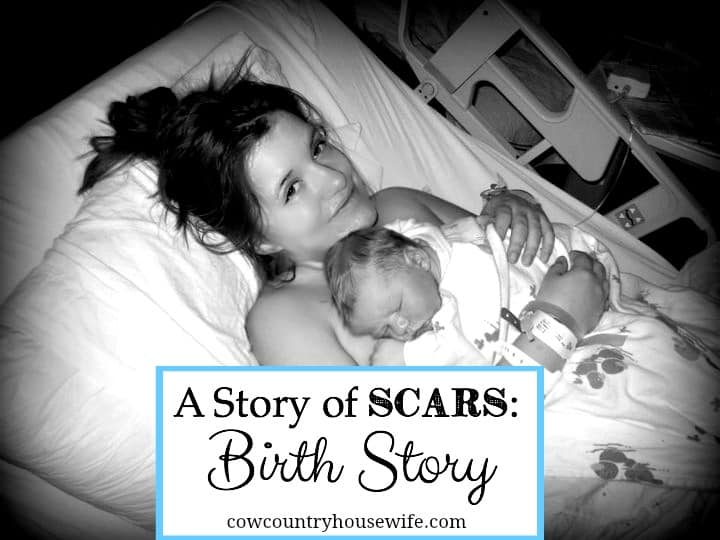 I love a good birth story. Mostly because my first birth was the opposite of the kind of birth I wanted. I need to tell you the story about my first birth: an unplanned C-section that left me feeling completely broken.

When I was pregnant with my oldest, I knew almost nothing. I thought that birth was the way that it was on those birth shows on TV: medicated, calm, and seemingly easy. The women in those shows always looked like they had a handle on everything in their birth. They looked very comfortable and happy throughout labor. They always looked like closing your eyes and calmly breathing was the answer to having a perfect labor.

Being an uninformed, scared 19 year old, I did everything that my doctor told me to. I was induced on my due date because my baby was “too big” and they were worried that he would get stuck. Horrified that my baby would get stuck (and horrified at what would happen down there with a big baby), I went in to the hospital on Wednesday the 27th to be induced. They started me immediately on Pitocin (the drug they use in the IV to speed up labor) and then gave me Ambien (yes, the sleep drug) to knock me out so I’d be well rested for active labor.

Related Post: The Only 5 Things Your Newborn Really Needs

I thought something was wrong when I’d been told all throughout my pregnancy that I shouldn’t even really take Tylenol, but here I am being given Ambien? Something felt wrong, but the doctor told me to do it, so I did.

I woke up around 1AM with my first contractions. I was able to go back to bed between contractions, thanks to the Ambien, but they were enough to wake me up every 5-7 minutes. By 6AM I couldn’t sleep through them anymore. Finally, around noon they were very strong. I was very excited to get my epidural and sleep through labor like the women in Birth Story did! I got my epidural when I was around 3cm dialated, which is when my doctor recommended getting it so that I “didn’t feel the bad contractions.”

The epidural was great! I looked at the monitor watching the contractions, but not feeling anything. They decided to increase my Pitocin to really help get things moving. It wasn’t 30 minutes when the epidural abruptly stopped working.

I felt everything. It wasn’t like the contractions from earlier though, the ones that came in waves and had a peak and then got less intense. No. These were like being squeezed by a python all over my body while being stabbed. And they never stopped. It was here that I discovered that I had back labor. I felt pain in my back and in the tops of my thighs and there was no amount of breathing through it that I could do. It was awful.

I begged the anesthesiologist to come back and stick yet another 12 inch needle into my spinal cord. He reset the epidural in a horribly painful procedure, but it worked! Alleluia, pain free again!

Then it stopped working again! The same pain, the same constant contractions, the same relentless squeezing. And I couldn’t move. I was confined to my bed. I was stuck lying on my back without any help or hope of moving around. It was pure agony.

By this time, it was around 3AM on Friday morning. I felt as though I needed to push. I figured that this amount of pain could only mean that I’m almost ready to meet my baby. I asked the nurse to check me and see how far I was. I figured that I must be around 9cm or maybe even fully dialated. I was not. I was only at 4cm. It was horrible. It was crushing. After being in labor for 26 hours, I was still only 4 centimeters dialated.

I couldn’t handle another 6cm of this. I paged the anesthesiologist again to see what was wrong. He came back in and decided to redo the epidural for the third time. Sitting still during the constant-Pitocin-induced-contractions was impossibly hard, but knowing that one false move could make the anesthesiologist mess up in my spine was a pretty good motivation to sit still… or at least try my hardest to sit still!

Another half hour reprieve… and back to the constant contraction. The epidural still didn’t work for me. They had never mentioned this happening in Birth Day; all of their epidurals worked!

I used a midwifery group that came highly recommended in our area; almost every baby delivered in Lancaster came through them. We had just settled in Lancaster and didn’t really know what to look for so we chose them as our provider during my pregnancy. I was so excited that they were a midwifery group instead of an OBGYN since midwives are supposed to be much less medical than OBGYNs are. They were a big group, 12 midwives, and you were at the mercy of whoever was on call that day as to who was going to deliver your baby. I didn’t even get a chance to meet all of the midwives by the time I was at the hospital. Including the one who walked into my room at 4am after I’d been in agonizing pain for almost a full day.

The shifts changed at 4am and the once supportive, sweet midwife was replaced by a dour woman who was angry that there was someone in labor at 4am. She took one look at my chart and said, and I quote “ONLY 4cm? It can’t hurt THAT bad.”

I wanted to cry, scream and jump out of bed and attack her all at the same time.

She said she’d “let” me labor for one more hour before ordering the c-section, because “obviously the baby was too big and wasn’t coming down.” I was so scared. I remember wanting to cry but I was in so much pain that I couldn’t.

5:15AM came around and in came the midwife and the surgeon talking to me about the c-section. I have no earthly idea what they were saying; I stopped listening after “it’s a routine procedure, I’ve done 3 so far today… we just cut you open and then the baby is out!”

As I scribbled my name down on the forms for the c-section, I kept thinking to myself if the epidural didn’t work, how are they going to make it so I don’t feel everything in the c-section?

I was prepped and wheeled off the surgery leaving my then-fiancé in the hall waiting for the doctors to let him into the operating room. The anesthesiologist game me what he called “a cocktail of pain killers and blockers” in hopes of something preventing me from feeling the whole c-section.

And there I was. Strapped to the operating table. There was a nurse by my head and she told me she was going to bring my fiancé in. I told her that before she gets him, he’s squeamish and WILL pass out at the sight of blood, so he needs to not see ANYTHING when she brings him in. It wasn’t until a while later that I found out that she grabbed him by his shoulders and steered him into the operating room and planted him by my head while giving the surgeons the instructions not to show him the baby over the curtain.

“You’ll feel lots of tugging and pressure, which is totally normal” was the last thing I remembered hearing before I finally heard the most beautiful sound in the world. 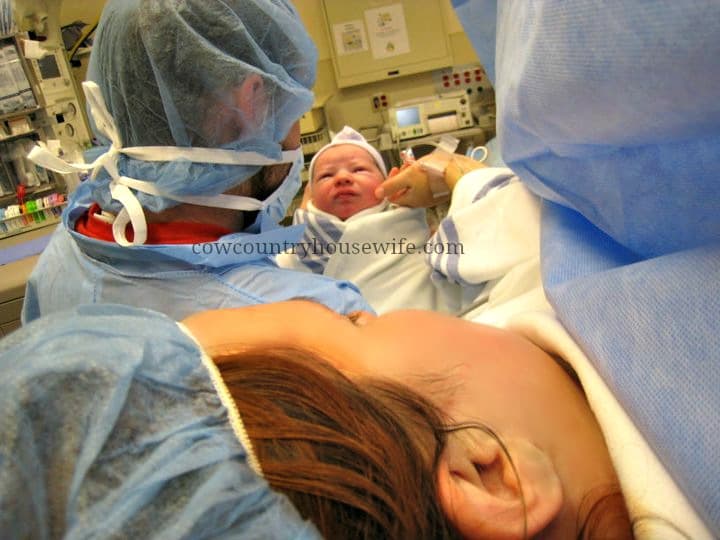 After 30 hours of labor, only progressing to 4 centimeters, 3 failed epidurals, lots of Pitocin, lots of screaming, at 6:36AM on Friday the 29th, our not-so-little Captain America was born. Just like that, the memory of the agony, the anxiety of the birth and surgery, the worrying that he would be ok, everything was overcome with love for this little guy. He was finally here!

His little cry was so… LOUD! He had a perfect set of lungs, a full head of yellow hair (yes, yellow), and was just the biggest newborn baby we’d ever seen. When the nurse told us that he weighed 9 pounds 9 ounces, we were shocked. We knew he was going to be a big baby, but we never knew he’d weight THAT much!

My recovery was hard and painful. The hospital stay was long. It was not how I ever imagined that my birth would go. But even worse yet, from the minute that I went into the recovery room, I knew that I had been marked with the “once a c-section, always a c-section” stigma. I tried my best to soak in the love for this precious person that had been kicking my ribs and sitting on my bladder for 9 months, but recovering from major surgery while dealing with a new baby required a super-human amount of strength that I didn’t feel that I had. 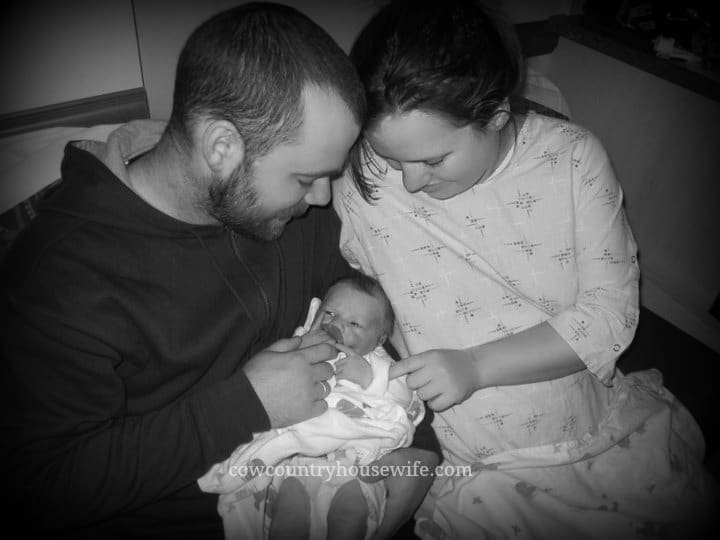 The evil nurses made me get out of bed 6 hours post-op… standard procedure, but it was AWFUL.

Eventually I recovered enough to go home and try to sleep in my own bed for the first time in almost a full week. It was there that I found a little documentary called The Business of Being Born which changed my world. But that is a story for a different day.